Am over in Surgery at the moment, we are on 3rd call tonight, and at the moment Shock and Receiving are empty — so it may be that what does come in will be able to be taken care of by Gerbode, as he is 1st call tonight. Hope so – but also, since my typer is on the fritz and this one is the only one conveniently available at the moment, I hope that even Frank doesn’t have business, as he is a typer of histories also, since the time when Eddie Welles and I practically converted the whole surgical staff to this system.

If we do not work tonight it will be the first night we’ve been un-busy since arriving at this spot.  Yes, have had a work-out again!  The volume has not been so terrific on our shift, at least, but we have had some dillies as far as cases are concerned.  One night we finished up with a six-year-old Alsatian girl on one table with a lousy looking compound wound of the wrist that was about three days old; and on the other table we had a 72-year-old Alsatian man with fractures of both wrists and wounds of both legs. The one wrist had gas-gangrene and Wally had to take off the forearm just below the elbow.  In fact, we had six people working on him at one time to shorten the time that he would have to be anesthetized. Russell and one of the corp-boys worked on one wrist,  Wally and another of the men worked on the other wrist and George Armanini and I worked on the legs while Ann Dunn (anesthetist for Geo’s team) gave the anesthesia.  We did not expect the poor guy to last more than a few hours after the operation, but here it is three days now and he is fit as a fiddle, chipper, etc.  The little gal, too, is doing fine.  The wonders of surgery and Penicillin, eh?  Or is it just amazing human resistance?  Of course, we have had those who did not do so well, too.  In fact, a couple of nights ago we had a pretty sour night, boys with lousy wounds and in bad shock, etc. who just couldn’t make the grade.

As for me, my toes are completely cured. Have been flopping into bed each morning after breakfast and staying knocked out (with Nembutal once) until someone awakens me in time to eat supper and go to work.

Tidbits of news: Dottie Collins was up here yesterday to go, along with three of our nurses and other nurses from the other hospitals in the area, to Paris for a 48 hr. leave there – i.e. they get 48 hrs. in Paris not counting the trip to and from. I think the men are getting to go to Paris in the near future too, and whether they are going to let the officers go in groups of three I know not, but perhaps they will do as they did in Sicily, i.e. have one or two officers accompany a group of enlisted men on each trip. Soooo, perhaps it won’t be too long before I get a chance to go there.

Had a letter from Monique. Says no news from her husband since August. Says Raoul’s daughter, Colette, age 15, lives in Paris with her mother who is remarried. Also, more news from Jean-Pierre who says Claudine and also Lilice are going to Paris. Wonder if they are going to be able to find some place there to stay and wonder, too, if Jeanne and David are going back there. Hope so, so that I can get to see them all at once there, if I do get there soon.

Funny thing happened last nite. As Carroll Russell and Ed Blasdel were walking thru Receiving coming to Surgery they were both hailed: “Dr. Russell! Dr. Blasdel!” They turned around rather startled and what do they see, on a litter, with a piece of shrapnel in his leg, but a fellow whom they know from the County Hosp. in Tulare. He, in fact, used to be their cast man at the hospital – now a Sgt. in the infantry. He was sure pleased to land at this hospital and to be operated on by Carroll! Coincidences.

Had another wedding here – and, of course, as usual, the “Gang-Greene” was not able to attend. We were busy as usual, tho’ when Frank Gerbode came over after the wedding and reception and showed up empty-handed we put up such a squawk – yelling at him for not bringing us any of the goodies – so that he kindly went back and came over to Surgery with a platter full of sandwiches and specialties of our chef from the wedding reception.  Oh, who got married? ‘Twas Bette Holmes to Capt. Richardson of a Signal outfit, I believe. Chaplain Daib has been around – and in fact performed the ceremony.

The “Brain-Trust” – or rather “Team”, consisting of Wolf Klemperer and Walt Byers — are really a couple of swell guys and we are extremely glad to have them with us, not only because of the work they do and take off the shoulders of the others, but also because they are swell to be with. Carroll has named them “Wolf-Gang”…

Yeow, Wally has brought a case from the ward to do – an amputation, so shall have to quit this now. 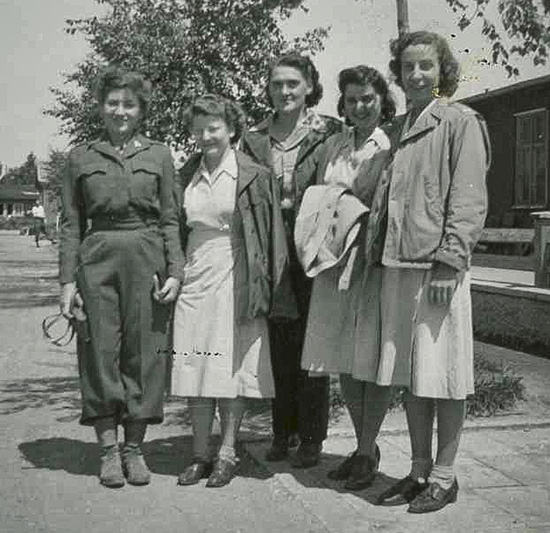 René tells his parents that Nurse Dottie Collins, who used to be with the 59th, stopped by the unit. She, along with three current 59th nurses and some  nurses from other hospitals in the area were headed to Paris. Pictured above (left to right) are: Liz Liss, Doris Clarke, Mac, Anne and Dottie Collins.
(Photo courtesy of Stephanie Moses, daughter of Liz Liss.) 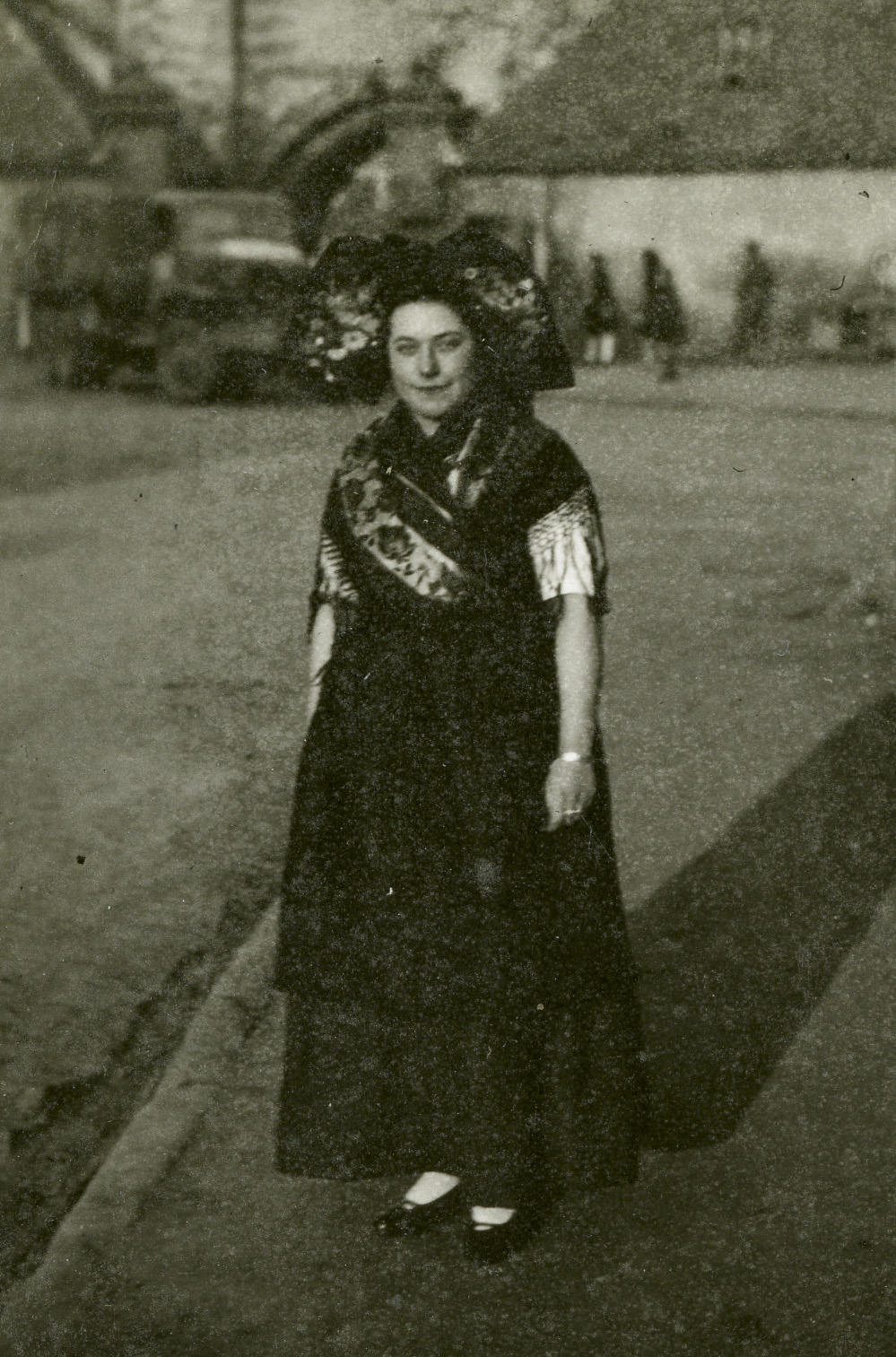 René tells of surgeries they performed on two local residents in the Mutzig area – a six-year-old Alsatian girl with a compound wound of the wrist and a 72-year-old Alsatian man with fractures of both wrists and wounds of both legs. Above is a young Alsatian woman in traditional dress. 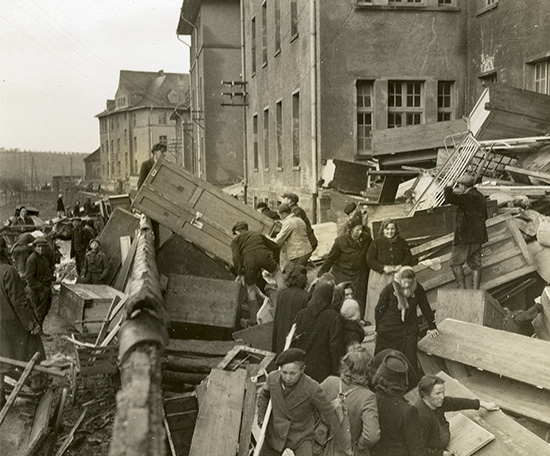 More residents of Mutzig – picking through the rubble (above) and doing laundry in the river (below). 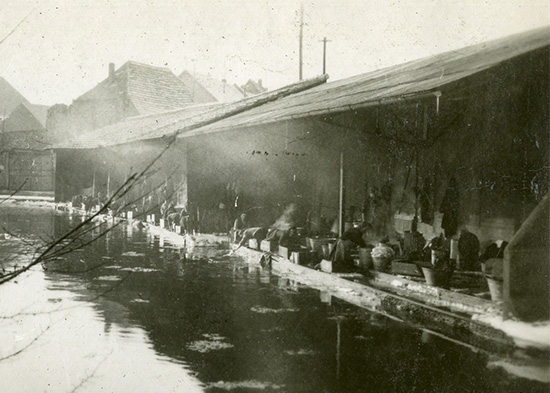