Almost a week since last writing and not a chance during all that time to sit down and get even a line off to you.  And strangely enough, only yesterday kept me busy in surgery.  Have, on the other days, been tearing around the country on one of those usual back-and-forth deals.  Things have been moving so fast over here, as you know, that it has been quite a problem to keep up with things, particularly when there is always the problem of getting enough vehicles to get us moved before the lines are once again miles and miles away.  Of course, it isn’t only the 59th that is and has been in that predicament — it applies to all sorts of units. Some, however, have their own transportation, enough to get themselves moved in one echelon, but we’re more on the spot when it comes to fast moving, for we have to rely on some outfit with enuf trucks to come and help us.

I awoke one A.M. rather late and, still being only partially dressed, I bumped into the Col., who greeted me with, “Rene, how would you like to take a trip?” I was still in a rather confused state but said, “Sure.” Soon found out that he wanted me to pick up some things at Hdq., and to drop in on our immediate bosses and find out what the prospects of our getting out of the spot we were in in a hurry, as we were already closed for business. It was quite a ways to go, so, besides the Col.’s driver (Davy), I took Treadwell and Chuck Schwartz with me for company and because they tho’t they’d like to see the country, too. They didn’t realize that it was going to be quite the lengthy trip that it turned out to be.

Anyway, we did what we were supposed to do, also saw our friend Bill Dunn (the Provost Marshall friend of Hattie Myren’s). On the way back we got a flat tire and decided to stop in at the Ordnance outfit to get the tire fixed before chancing some of the less used roads without another spare. While getting the tire fixed, the Lt. in charge asked us in for supper, which we readily accepted. When we introduced ourselves as being members of the 59th, we were greeted with, “Where are you guys?” It seems that out of the five officers at the table with us, two had been patients of ours in Sicily, one knew some of the nurses, and another was the APO fellow who had handled a good deal of our mail at various times.

Got home rather late that evening, but the days are so long now that we had only a very short time when we had to use lights on the way back. When I got in the Col. was already asleep so, when I gave him the dope the next A.M. he sort of surprised us by asking how soon we (Bish & I) tho’t we could get our trucks out on the road.

Anyway, in very little time we got the trucks ready, the first echelon boys packed, Stan Jobe and myself packed, and Roy and Frank packed and off in the jeep.  Roy and Frank took off separately to go up and notify Col. Petefield (whom I had seen the day before) what we were doing, and I was leading our bunch down to a town where we were going to meet Frank and Roy. They had a lot more mileage to cover than we did, but we figured to meet in this town at about the same time – that is, both getting there about the same time. To make better time, Jobe and I divided the trucks into two groups. I took the first group, leading in a weapons-carrier and he did likewise with the second group.

That ride was really beautiful, despite the fact that the weather was not good.  We paralleled a river for a considerable distance and with everything green, some wild yellow flowers of some kind in patches everywhere, and the usual spic and span German towns along the way, all was most picturesque.  It was really amazing to all of us to see what a beautiful and fertile country Germany really is.  Of all the places we have been overseas, the country and the towns in Germany have all the others beat.  Most of their towns are built up with houses rather uniform, and much as I hate to admit it, their streets and towns are considerably cleaner than even the French towns.  Why hadn’t they just been satisfied with their own country, and not attempted to branch out and take over other countries that did not come up to their own in most respects?

Even the towns that had been reduced to rubble were neat.  The people had gotten busy and straightened things out, cleared the roads and by-ways.  So, despite the devastation that was evident, the towns did not look as bad as they might have.  Most of the smaller towns were pretty intact, but the larger ones and those at strategic points were only shells of their former selves.

All the way along it was evident that the Germans had systematically blown up all their bridges, whether they were large or small.  How they ever slipped up on the more important one on the Rhine and, more recently, on the Danube, I cannot figure.

Our engineers certainly have done a wonderful job of getting bridges up in a hurry all over the place.  However, as we approached the town where we were going to meet Frank and Roy (we had agreed to meet in front of the largest church or in the town square or city-hall if there was one), what did we see before us but a chasm where there was no bridge and no markers of any kind.  Luckily Sgt. Jones (who was driving with me) had slowed down a short ways back, why, neither of us know, and the convoy was a good mile behind us.  We turned around, and found a place where we could get around the absent bridge by going out in the muddy field on the side.  Then after directing our trucks that way, we stopped long enough to put up road blocks on both sides of the road.  Also put up a sign, “Road block constructed by engineers of the 59th Evac. Hospital.”  All the engineer outfits advertise when they put up bridges, so our boys figured we might as well also. 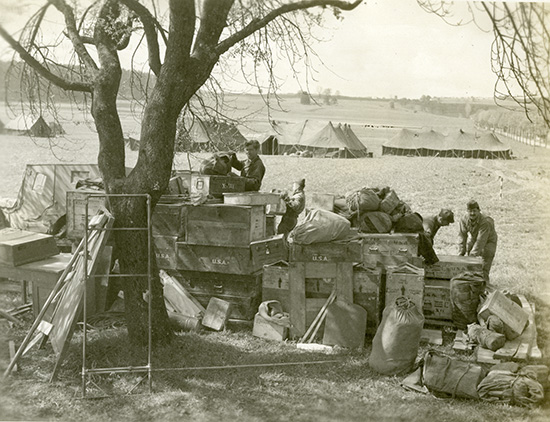 The 59th packing (or unpacking) 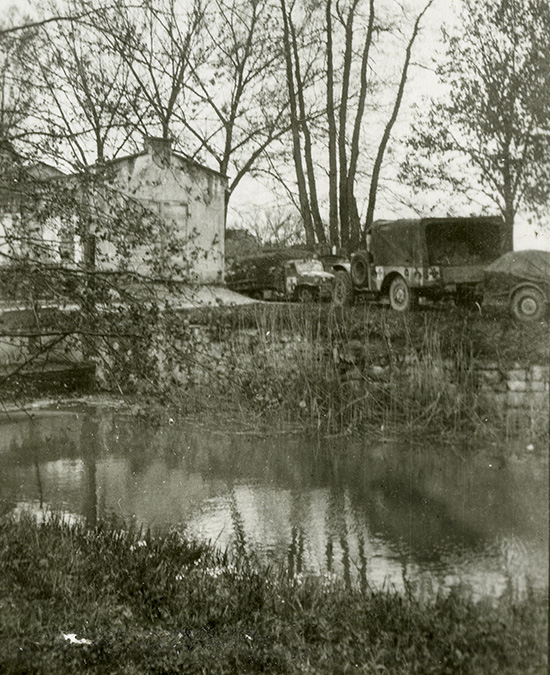 René’s caption for this photo reads: “We bivouac overnite on edge of town with first echelon convoy. Got into this town ahead of the 21st Corp. headquarters (we had been told day before the town had been taken – it had been, but also lost once and recaptured just a couple of hours before we barged in.)” 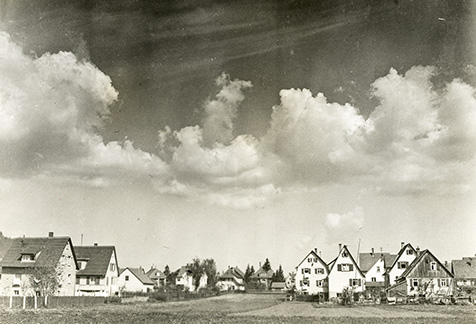 Reflecting on his recent travels through the German countryside, René says, “Of all the places we have been overseas, the country and the towns in Germany have all the others beat.” And then he ponders, “Why hadn’t they just been satisfied with their own country, and not attempted to branch out and take over other countries that did not come up to their own in most respects?” 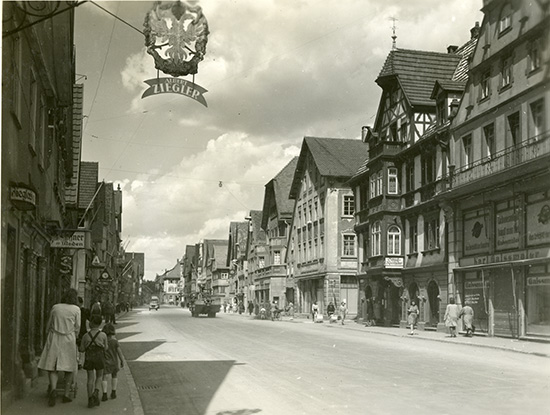 One of the “spic and span German towns,” René probably saw during the drive he describes in today’s letter. 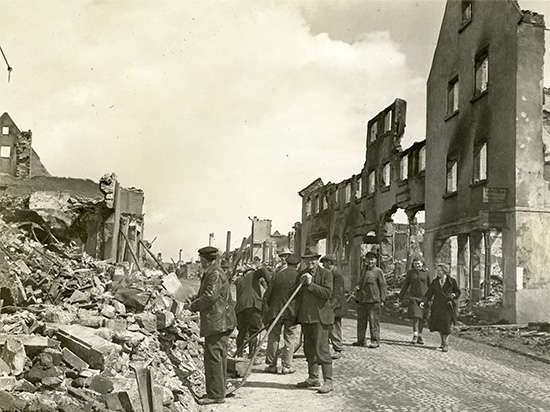 René tells his parents that, “Even the towns that had been reduced to rubble were neat.”