As our activity died down, the other Evac. hospitals leap-frogged us and followed the front across the Rhine, leaving us to take care of the Divisions temporarily assigned to occupying and policing the Saar.

Daily we witnessed the steady stream of traffic pouring over the superhighway past our front door to the front, and daily we watched truckload after truckload of German prisoners being brought back to POW camps in the rear.

All of the activity was by no means confined to the highway; morning and afternoon, flight after flight of fighters and bombers roared overhead on their way to and from targets further in the Reich. The majority of the fighters were the now familiar Thunderbolts, but a few Blackwidows appeared now and then. The bombers were mediums, B-25 Mitchells and B-26s, and occasionally a tremendous flight of the big Fortresses. It was really quite a sight to see them roar over in their tight formation. Our Russian and Yugoslav and Czeck helpers practically danced with enthusiasm, while our German patients shuddered at the sound. 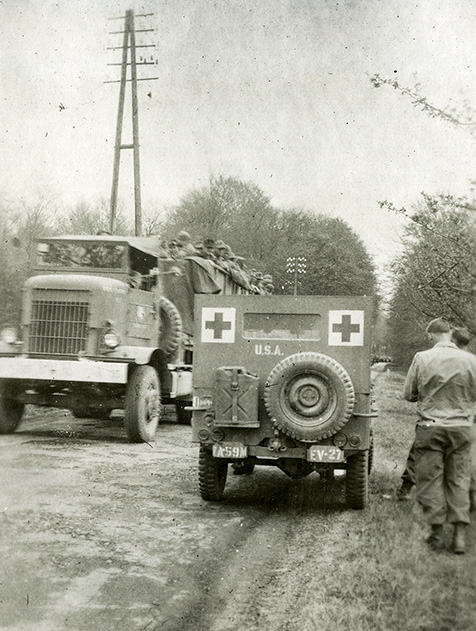 René’s caption on this photo reads, “German POWs being brought to stockades by the truck load in convoy.” Shown from the back at the right of the image are Bob Treadwell and Chuck Schwartz.