At last I have a little free time and am able to sit down and do what I have been wanting to do for the past week, and that is to tell you about the trip home and how perfectly the surprise worked.  It couldn’t have been planned any better!

That night after I spoke to you (September 26th), we all sat around the Dufayel most anxious to know when we were going to be leaving. The hours dragged by and we still were there!  We thought that they were never going to tell us that it was our turn to leave for the airport, but finally at about 11 P.M. a notice went up on the bulletin board that we should be ready to leave at midnight.  We actually left soon after midnight and were taken by bus out to Orly Airport, but there again there was a delay. We were told that our plane would not leave until about 4 A.M., and so they took us to a nearby restaurant and we had a mighty early breakfast at 2 A.M.  Then came the business of changing our money into the strange-feeling American currency. It was certainly an odd feeling to have American bills and silver dollars in our hands.

Finally we were taken out to the plane that was to take us across the Atlantic — 24 of us. At a quarter to five we took off and said our last good-byes to Paris as we circled the city. I was thinking of all of you down there and wishing that you could have been stowed away in that plane with me.

It took just eight hours to the Azores where we arrived at noon-time, had lunch, were given a box lunch to take along, and had a chance to stretch our legs a bit.  The next 10-1/2 hours to Newfoundland were somewhat tiresome, but I slept most of the way. At Newfoundland we had another meal and then they whisked us back to the plane in a hurry, and we were on the last leg of our journey to the U.S.

We landed in Wilmington, Delaware instead of in New York, somewhat to our sorrow, as we all would have liked to have had a few hours in New York before setting off across the continent for home.

When I found we were not going to have the opportunity to get to N.Y. I immediately started to phone there. I awakened Alain [Yvette’s first cousin] at 7:00 A.M. and he was naturally just as disappointed as I was that I would not be getting to see him or Ilsa. I told him all about you and also told him what you thought of him for not writing, etc. His explanation for not having written to you (and I’m not just trying to be a peace maker) was that somehow he had heard, or misunderstood some letter and consequently believed that Jean Guy had also returned home. He said something to that effect in a letter to Monique and also had a letter almost completed, written to you, when he received an answer from Monique telling him that his belief was all wrong, unfortunately. That apparently unnerved him somewhat and he was then at a loss as to what to say to you. Personally, I didn’t think it was too good of an excuse and I told him so, but to a certain extent I can see how he would feel. Anyway, if he writes to you now, I sort of think you should forgive his long delay.

We left by train that evening, and the trip across the continent was, of course, four days, and time dragged terribly, but we spent most of our time reading or playing bridge. I hate traveling on a train anyway.

René and his cousin Yvette in Paris in September 1945. 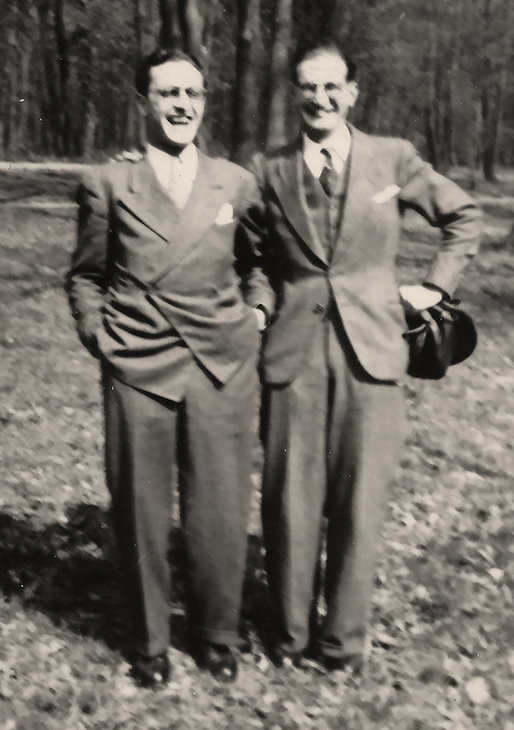