Today we left even earlier, at 6:15 A.M. and I drove over the tough winding hills. There were really some tough ones, hair-pin turns and all. Of course, with those trucks and the load, one couldn’t go over 15 m.p.h. up any of those good inclines. With the road rather narrow, and oncoming traffic every so often, it was quite a little job.

I had gotten into the habit, ever since the first day, of riding with the gun-turret cover off, so that I could jump up on the seat and see what was going on behind us – how the other trucks were following, etc. Roy, after that first day, stayed in the rear except through cities and when we came to control points, gas points, etc. As a consequence it was up to me to see that we didn’t outrun the rest of the trucks.

When we were going around turns it was sort of difficult — for we would only get a glimpse of one or two trucks every so often if we were going in the opposite direction from them around a canyon wall, etc. When I was driving, the fellow with me stood up and told me what was going on. Yes, we had quite a system. This was especially useful in passing other trucks or convoys, for I could see ahead of the other trucks – i.e. over them, and could tell whether we were going to get stuck or meet opposition or whether it was safe to pass. I could also motion our other trucks on in the same way.

We had quite a time passing some of the convoys – actually we weren’t supposed to pass other convoys without special permission, but as we were a small convoy and could travel, therefore, much more rapidly than most, it was silly for us to stay behind one that we could very obviously and easily pass. The British and French convoys, especially, traveled slower than we did, and, as luck would have it, we seemed to meet them on the turney-twisty roads. It was then that riding in the turret really came in handy.

That fourth day we passed quite a strange British convoy, one that seemed to be made up mostly of smoke producers. We landed in the town of Setif at 7:30 P.M. that evening, having traveled 257 miles. The bivouac area was pretty nice. It was a great open field that had latrines and a few small round domed huts. By these huts there were faucets and stands where one could wash very conveniently. There was also good drinking water from a faucet. That night many of the officers slept in one of these buildings, but Roy and I stuck to the outdoors. Roy in his trailer-hut and me in the truck with Jim Hamilton. 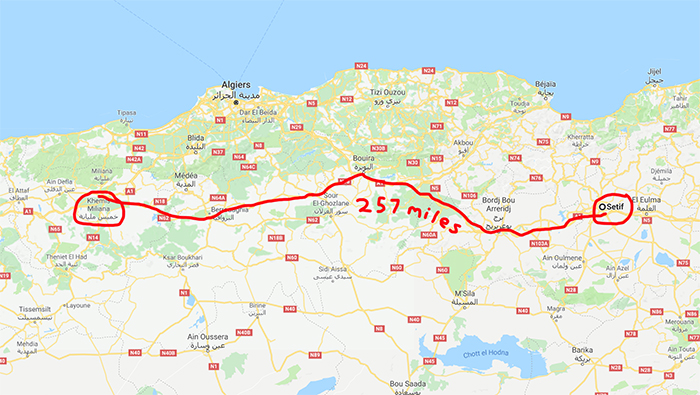 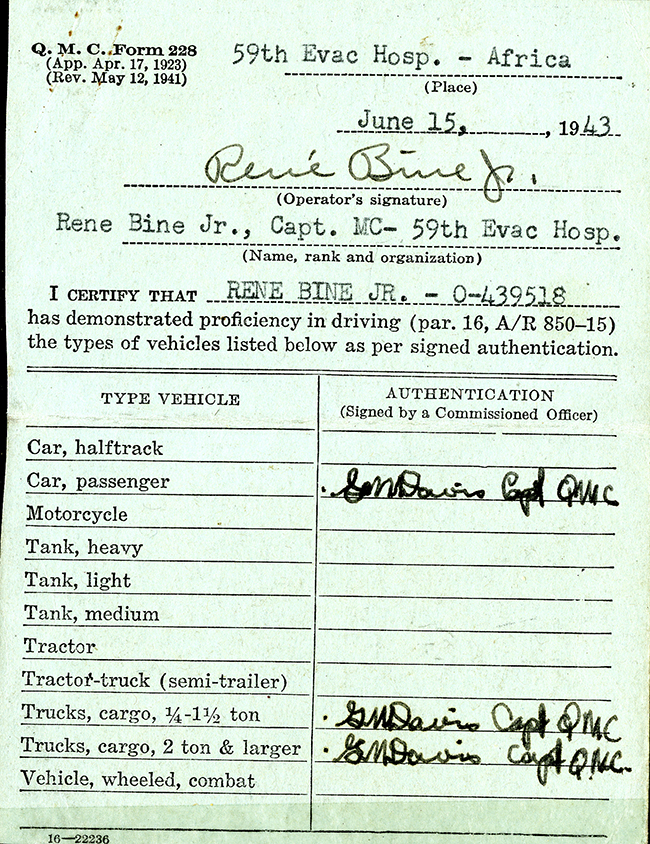 René is making good use of the truck license he got just 5 days before the convoy of Cohn’s Courageous Commandos drove away from the rest of 59th Evac Unit in Casablanca.