Coming into the harbor at Bizerte on the A.M. of the 20th, with the Captain running the ship, we scraped our propellers somewhere on the side of the channel, thus taking a chunk out of one of the propeller blades. Then the Captain turned the ship over to Mr. Mockbee to bring into dock – realizing that he himself was in no condition to do so.

After lunch, I took the Captain up to the 56th to see what could be done about him. Told the situation to Lt. Col. Winans who immediately said that he thought te Captain ought to be in the hospital for a few days. The Capt. was agreeable, so we went back to the dock to make arrangements for him to get his toilet articles. Back up at the hospital, the Capt. was handed a pair of pajamas and a bathrobe, he turned to me like a little kid, and said, “I don’t think I have to get undressed, do you, when I’m only here for observation?” That almost floored me, but I said, “But, Captain, you have to go to bed to sleep tonight, don’t you?” He finally agreed, but the minute he stepped into the ward, he was just about ready to go back to the ship again. What a contradiction in his make-up! He had been talking in a hopeful tone before, on the way up to the hospital, really hoping that he would be sent back to the U.S. Then he is in the hospital for a few minutes and he wants to get out.

Anyway, I left the Capt. to the mercy of Major Rippey and Col. Winans and headed back to the ship. However, as I started to leave the hospital, I caught sight of a general, and knowing that Col. Blesse of the 56th was the brother of General Blesse, Medial Head of Allied Forces here, I figured that the general I saw was Blesse. So, I went up to him and told him who I was, and that I’m from the 59th and was, I hoped in the next few days going to be taken off the LST and sent back to the 59th. I wondered if he could tell me where the 59th was or where it would be. He said that it should be leaving that day from Casa, for Algiers. And then, he surprised me by asking, “What, you’re still on an LST?” When I told him I was, he said that we were only supposed to have made one trip. I told him that we were all set up to make a 4th trip. He said he would see about it right that evening.

So, I returned to the ship and found that we wouldn’t be going out for another trip for a couple of days anyway, because it would take that long to fix our propeller. That was O.K. with me as that third trip had been awful monotonous. That evening we went into the Lake with the ship and everyone enjoyed the evening and the next A.M., in the Captain’s absence.

On the night of the 20th, who should come aboard but Mr. White (Herb White is his name). He was back from Algiers and in grand spirits. When we took so long to get back, or so we thought, he had visions of having others beat him with pictures, etc. to the States. He was especially fearful that the British might beat him and have pictures of the British landing on Sicily before the Americans. But, when we saw his face on his return, we knew he had had it in the bag. In fact, it was far better than he could have ever dreamed it would be. He had somehow managed to talk himself into transportation from Bizerte to Algiers the Monday morning when we returned. In fact, the Navy gave him a private plane all the way there, so when he got to Algiers there was no one ahead of him and he got eight pictures and a story off right away over the Radiogram. And then his other pictures went by plane that same day, back to the U.S.

He said they all turned out good, and his 8 pictures and story were in the Tuesday, July 13th morning editions of all the papers in the U.S. And, in a few days he got a radiogram from A.P. congratulating him on such a scoop, for his pictures beat all others, not just by a little, but by four whole days. Apparently no others had been able to get plane transportation to Algiers and he had it all over them. He said that all the other pictures should have been in the Sunday editions of all the papers, i.e. Sunday the 18th. Herb was headed back to Sicily to get in on some more activity, and as we weren’t going just then, he left us to get on another ship. 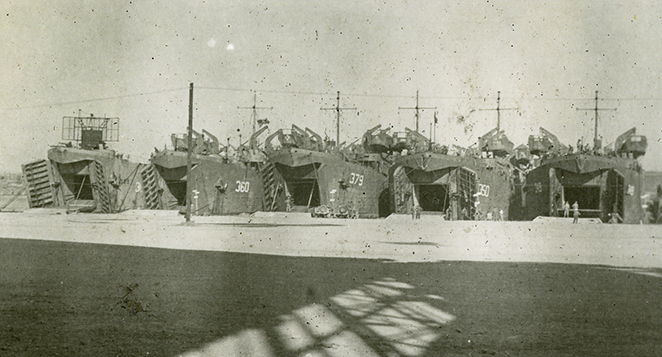 LSTs – short for Landing Ship, Tank or tank landing ship. It is the naval designation for ships built during World War II to support amphibious operations by carrying tanks, vehicles, cargo, and landing troops directly onto shore with no docks or piers. Shown above “with mouths open” and below being loaded in Bizerte. 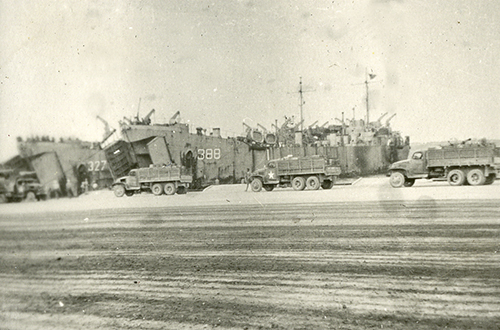 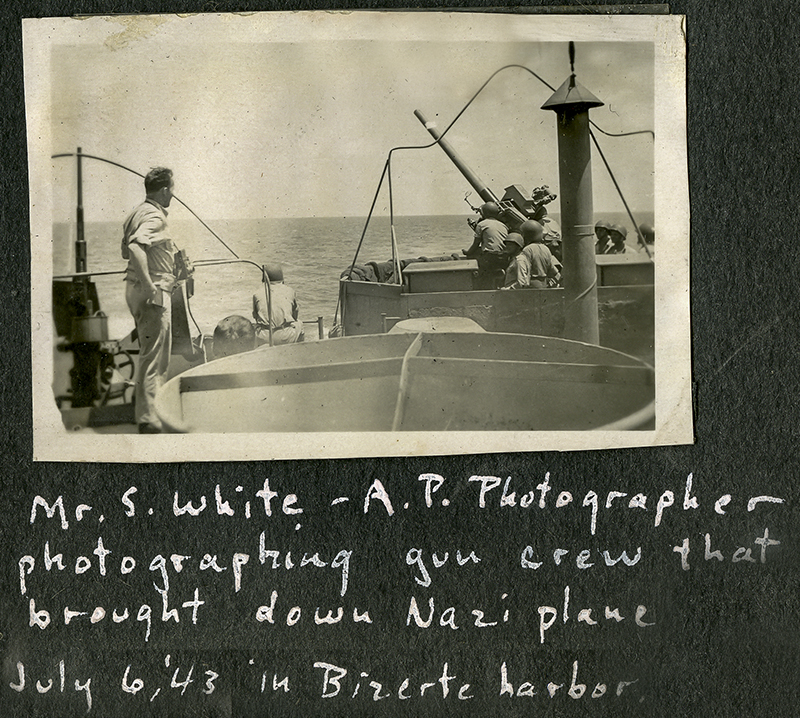 Photo above shows Herb White – the AP photographer René mentions in his journal entry.
Below is one of his photos – on the front page of the New York Times on July 13, 1943. 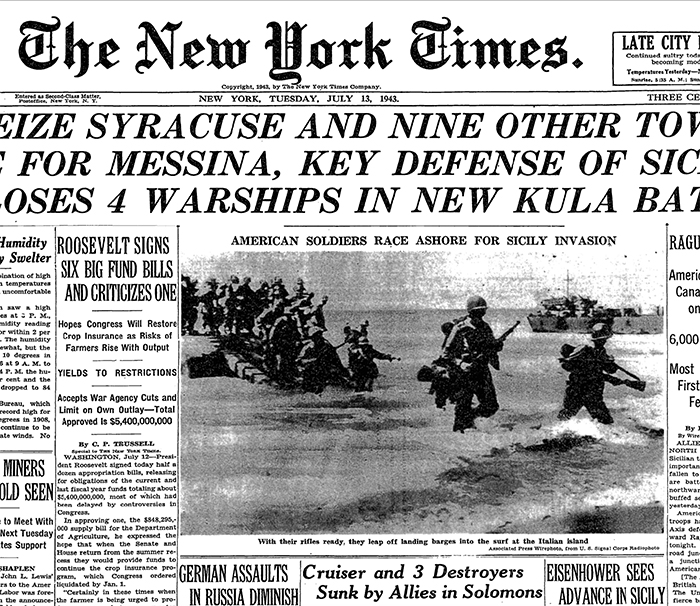 On July 21, Dr. Westdahl writes in his journal about the journey he and the rest of the 59th are taking, “Today we traveled as far as Guercif, a nondescript little green spot in the midst of barren dry desert. It is hot, dusty, windy – washed my shorts and socks after dinner and they were dry, but brown with dust in 15 minutes. Passed through Fez and Taza today. Both beautiful towns in the Atlas mountain valleys. The land in these valleys is extremely fertile and the broad wheat fields are beautiful. Here we saw the first tractors and large multiple bladed plows and threshers. However, occasional individual Arab women and children are seen cutting and threshing by hand. Some are even picking over the fields already cut by the tractors, just as did Ruth in the book of the old Testament of that name. As always, we are seeing Biblical scenes re-enacted.”