We are still in the same place and enlarging our hospital again, not because of any particular increase in patients, but to lighten the load on another hospital that is a bit crowded. As a consequence, I am going to be an M.D. again instead of just a supply man. I am going to have a surgical ward with Carroll Russell. Our surgery now has been doing more work, hernias, open reduction of tibiae, hemorrhoids, etc., and things are working out pretty well.

For the last four or five days Serge has been pretty sick. Just what he has had, no one seems to know. He has been at the other hospital – why he was sent there, I can’t figure out, but that’s the way things are done. He is much better today, so apparently he didn’t have any typhus or malaria, as they first thought he might have. Incidentally, we got our 5th shot of typhus today. It had been found out that the original 3 shots did not bring the titre up nearly enough, and that 8 shots are required to give adequate protection.

Last night after dinner, Lois and I went with Ed Cane and Liz Liss to the home of a native of this place – a French lawyer of about 28, who lives with his aunt and uncle. It was most interesting as they talked both French and Spanish to us (Ed speaks and understands Spanish some), and those two languages plus Arabian among themselves. It was like a 3-ring verbal circus. I did alright as long as they stayed in French, but when they started mixing them up, I was lost and didn’t know even the French in their sentences. They were very nice people and had some very good French pastry – donut-type, almond pastry, etc. We are to have dinner there on Friday. 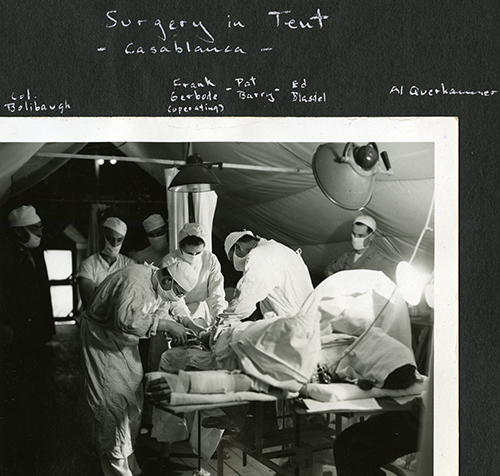