Fortunately, we can follow the activities of the 59th Evac. Hospital through the entries in the journal kept by Philip Westdahl and photographs from René’s albums.
Below is Dr. Westdahl’s journal entry for August 5, 1943

We start our Mediterranean cruise, although not under the circumstances that most Mediterranean cruises are advertised. We are aboard an LST leaving the inner harbor of Bizerte about 1:15 pm. Along the channel we see numerous partly submerged ships and some barely visible beneath the surface lying on their side.

From this view we can see to much better vantage the destruction of the docks, warehouses and buildings of Bizerte, many of which are completely flattened and others remain as walls enclosing a hollow, rubble-containing shell where once a house stood.

Progress in cleaning the city has been slow and is still proceeding. As we pass out through the breakwater and look back on the waterfront lined with palm trees, the white sandy beach and the deep blue water it is easy to believe the Bizerte was at one time a veritable paradise.

We lay at anchor just outside the breakwater and wait for the remainder of the convoy; finally we are away – 12 LSTs, 2 LSIs (landing craft infantry) and 4 small escort ships resembling corvettes.

We sail almost due east and by nightfall we pass the island of Zembra and the tip of the Cape Bon peninsula. Along the shore just after leaving Bizerte we could see many scuttled ships left by the Germans after their unsuccessful attempt to evacuate from Africa.

I’m sure I speak for everyone when I say that we are happy to be leaving Africa after 7 months of living in that fly-ridden dusty country. 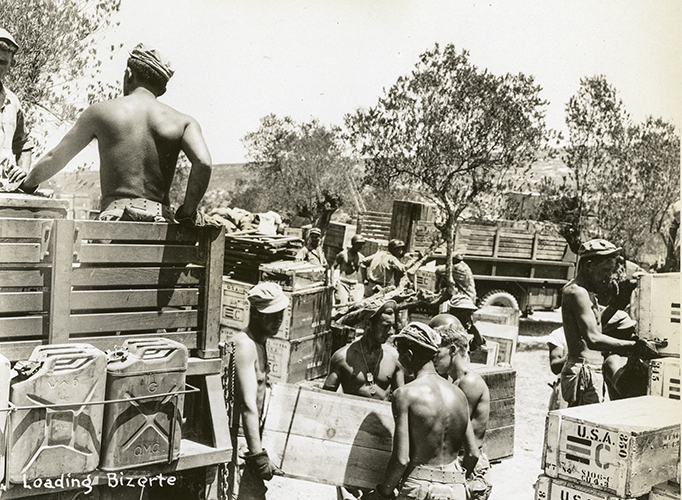