No letter from René today. Here’s an excerpt from the journal of Dr. Philip Westdahl about what the 59th was up to in Carpentras around August 28, 1944.

We arrived at our destination near Carpentras late at night and the following morning all pitched in to set up the hospital. By late afternoon we started to receive casualties and from that moment on, the shock tent and operating tent were beehives of activity. This continued for four days before other evac. hospitals leap-frogged us and took over the load.

This was the work we have been waiting for for two and a half years, and the improvement in morale was noticeable throughout the unit. There were a great many kinks to be ironed out before we really functioned smoothly. We were a little slow in running cases through surgery, not only because of our being unaccustomed to rapid technique, but the prepping and anesthesia added here and there to the backlog of patients awaiting surgery. From time to time there were as many as 50 to 60 patients in the shock and pre-operating tents.

The shock tent functioned beautifully. Patients brought in in extremis were immediately and adequately transfused, many receiving 1000cc blood and 2 units of plasma, and arrived in surgery in excellent condition.

The cooperation and willingness of the entire staff to help and work hard was most gratifying.

By far the majority of our cases were German prisoners, and except for waiting until our own boys were taken care of, their care was excellent. The time interval between injury and surgery was in many cases 48 hours, particularly among the Germans. Many of them lay in the field, abandoned by their own troops, and were picked up 24 hours later. Delay in waiting for surgery due to the volume accounted for the 48 hours. Consequently there were a few gas gangrenes, some of which required amputation.

Most of the wounds were multiple shell fragment wounds, produced by bombing and shelling. These were treated by the usual wide debridement and vaseline open dressing. In most respects it is a very sickening type of surgery – cutting away dead skin and muscle and removing fragments of bone and metal. Often the resulting defect would extend from hip to the knee and down to the femur, leaving a wide, gaping wound. If cleanly debrided, however, these could be closed by secondary suture within 5 to 10 days, often with very satisfactory results. 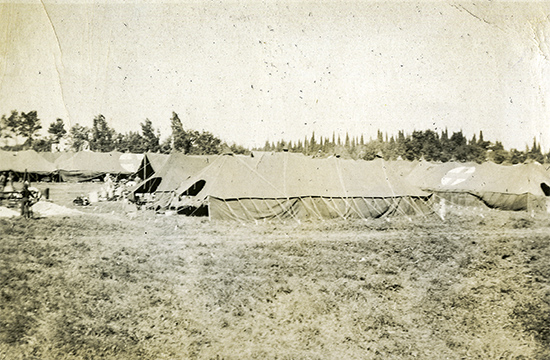