René mentioned in his most recent letter that Dr. Phil Westdahl had captured a German soldier in Tiefenthal. On April 9, 1945, here is Phil’s account…

I had the unique experience one morning of capturing a German soldier. I had often heard tales from our patients of how German soldiers wandered about looking for someone to whom they could surrender, little thinking that I would ever be faced with such an experience.

One morning after operating all night, I walked across the road to take a picture of the hospital before going to bed, it being one of our first sunny spring days. Just as I was about to snap the shutter I heard a voice about 20-feed behind me. I turned around, and to my amazement saw this German soldier standing there with his hands raised over his head in the familiar gesture of surrender. ‘Twas a very fortunate thing for me that the situation wasn’t reversed, because I had presented a beautiful target had he felt inclined to use me as such. I was neither armed nor was I wearing my Red Cross insignia.

As soon as I recovered my wits, I ordered him to advance, using my best German, “Kommen sie hier!” (Come here!) When he approached, I searched him and found that he was unarmed. He was a baby-faced, clean-shaven blonde fellow, no more than 18 years old at most.

He must have been hiding out at some nearby German farmhouse to be so clean, coming out of the woods as he did several days after our troops had passed through this area. I proceeded to march him up the road to our headquarters and created quite a stir as I turned him over to our executive officer with a casual announcement that this German soldier had just surrendered to me, and was now in his hands.

Word spread throughout the hospital while I slept during the day, and by nightfall, the story had become considerably magnified. I had taken the first prisoner to be officially captured by the 59th Evac. 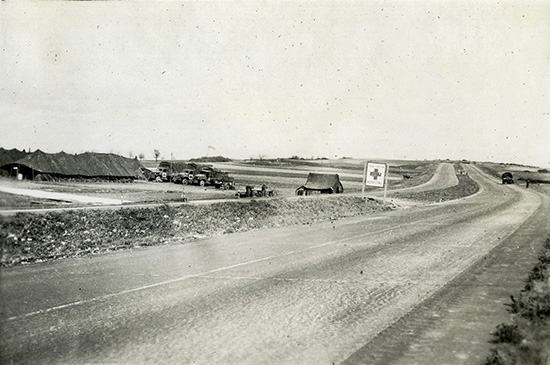 Phil’s “unique experience” started after he walked across the road to take a picture of the hospital.