The nite of August 30th, I went to the Sternberg’s for supper. I was greeted at the door by Nicole and Jean-Jacques. Jean-Jacques is 11 years old, has closely cropped red-hair, is smart as a whip and apparently quite a little devil. He is somewhat, tho’ not badly, spoiled. He’s really a kick. It seems that at Rodez he was all over the place, outdoors playing almost all the time, and when he arrived in Paris he still wished to continue doing the same sort of thing. So, he goes all over the place now by himself and manages nicely. He likes to ride the Metro, of course. He apparently had a whole speech in English cooked up for my arrival, but then got embarrassed and didn’t spill it. He does speak some English and understands fairly well, but won’t use what English he does know.

Anthony, whom I saw a couple of minutes later, looks well. He has grayed around the edges, but does not look any older than he actually is. He looks younger than Paulette. Of course, my only mental picture was of him in 1923 when he was, as I remember, dark-haired and sort of round-faced. He has, now, somewhat sharp features and wears glasses. Considering that he spent 5 years in prison, he certainly looks fine.

Of course, his life in prison was really not too bad.  He showed me pictures of the prison at Lubeck that had been taken by the Germans at one time or another, and which he picked up when they cleared out.  Being a camp exclusively for officers, they naturally had privileges which were not accorded other prisoners — and the treatment was nowhere near what that of the political prisoners was.  Anthony was the Chief of his barracks, apparently because of age.  They were able to exercise, had their own theater, complete with stage, and they put on plays and skits for their own benefit from time-to-time.  He showed me one picture where some of the cast were dressed as women, and a good time seemed to be having had by all. Another picture showed them playing volleyball in the courtyard of the prison (which, incidentally, was an old castle on a hill on the edge of a town). The view from the prison was mighty nice, looking out over a fertile valley.

At the camp, all sorts of un-imaginable things went on, but Anthony did not attempt to participate, because of his position as the Chief.  He felt that the less he knew of the activities, the better it would be, for then, when questioned by the Nazis, he could truthfully say that he knew nothing under-handed was going on, and his manner of telling it would be far more convincing, he felt, if he actually knew of nothing specific, than if he did know of some of the things the others were doing.

It seems that they had a few radio transmitters right within the prison, and were able to transmit a good deal of information to the British from there.  Some of the men had codes worked out with their wives, and though the letters they wrote were seemingly harmless, they actually packed a lot of dynamite in them.  A few were even able to work out and establish a code while they were in the prison, having had no pre-arranged deal before they got there.  Some of this was done by means of writing that the package that a wife had sent did not arrive.  That would call for a Red Cross man to come to the prison to investigate, and when that investigator would arrive, a message would be sent back with him, perhaps without him even knowing it.  There were other things on that order, too, which are almost unbelievable — surprising to think the Germans were so dumb and unsuspecting at times.

Apparently a lot of packages and letters never did arrive at their proper destination, tho’ the prisoners did, from time to time get Red Cross packages OK. Anthony never did get anything you sent, Dad. Didn’t you say you sent something with the wife of Anthony’s fellow prisoner? Apparently, too, we are not the only ones who tho’t of using certain associations. Paulette said that when she wrote to Anthony they frequently spoke of the possibility of my arriving to visit, and when the first landings were made in France that was the way Paulette was able to tell Anthony.

Watch for more of this letter
September 2, 1945 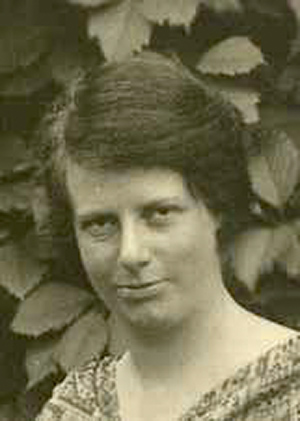 René had dinner at the home of Paulette Sternberg (above) and her husband Anthony, who was a prisoner of war for five years, including at Lubeck POW Camp in Germany.