On Tuesday morning (October 2) we arrived at Camp Beale, which is near Sacramento, about 120 miles north of San Francisco.  We soon found out that not only would we be allowed to leave the camp within 48 hours, but that we would actually be out of the Army within that time. As soon as I found all that out, I decided that I would phone Bobsy and see if she would come up and get me, and then walk in on Mom and Dad as a surprise on Thursday, the 4th, their 31st wedding anniversary.

Consequently, Bobsy and her room-mate drove up on Wednesday night and stayed with some of Mom’s cousins in Sacramento overnight, and then came out to the camp on Thursday morning.  It was certainly grand to see Bobsy again, and strangely enough, she looked just the same as ever.

Two other officers drove down to San Francisco with us.  We were all surprised that, with the exception of a number of new buildings in out-lying districts, the city looked pretty much the same as when we left it.  What a welcome sight!

We drove in our back alley wondering if both Mom and Dad would be home. Just as we rounded the curve, however, we noticed Tante Marie getting into her car, so Bobsy jumped out of the car we were in and I got down on the floor so I could not be seen, as we didn’t want Tante Marie to see me before Mom and Dad did.

Bobsy flew into the house and grabbed Mom and Dad.  Of course, the fact that she was home in the middle of the week instead of staying down in Salinas teaching, was enough of a surprise for them. But apparently Mom thought, “Well, that’s just like Bobsy!”  She told them that she had something for them, but the package was too heavy for her to carry, and they would have to come out to the car to help her carry it in.  They thought something was funny, but didn’t have much time to do any more thinking.  Mom said afterwards that the gleam in Bobsy’s eye made her think that it was something extra-super-special, but she didn’t have time to ponder on what it might be.  Anyway, when they walked out and were near the car, I suddenly got up from the floor of the car — and you should have seen their faces.  Dad turned as white as a sheet, got to me first, and then Mom staggered forward and hung on to me.

In the long run, surprising them was much better than phoning them from the East or letting them know in any other way.  This way the surprise was over within a few minutes, they were back to normal in about an hour and everything was fine, whereas had I let them know by phone, they would have been waiting every minute for days.

The funny thing was that Mom had written a letter to me — which, of course, I never got — just a few days before, warning me that she didn’t want any “surprises.”  But after I got there she decided that “pleasant surprises” were O.K. and easy to take.

Strangely enough, after having been home just a few days, those three-and-a-half years do not seem nearly as long as they had for the past year, over there.  It feels as if I haven’t been away long at all.  The folks are all the same, the city is pretty much the same (just much more crowded).  The biggest changes noted are in the young kids, in the kids who were tiny when I left and who are now tall and almost grown-up.

Watch for the conclusion of my letter
October 16, 1945 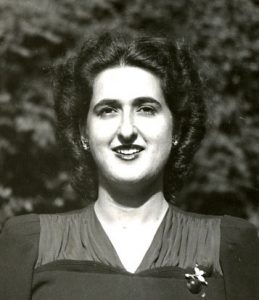 René and his sister, Barbara (Bobsy), cooked up a big surprise for their parents on their 31st wedding anniversary.