Yes, my dear, I agree, women are strange creatures! The whole thing was a complete surprise to me, and that, I guess is what made it worse for me. I hadn’t had the slightest inkling of what was coming, until that 21st of December. The whole thing is pretty unexplainable, apparently even for Lois. As she says, “I can’t accurately analyze when or how or why it happened — it just did — and that is about all I know for sure.” Probably the best explanation is that she wasn’t really ready to settle down to sticking to one person alone, particularly in this kind of a set-up where everything is sort of abnormal at best. What I mean is, those who go out with various fellows get to see and do a lot more than those who only go with one, particularly if that one is in our unit where our transportation situation is such that it is practically impossible to get around. All this, undoubtedly, was a factor. That’s about all I’m able to tell you for that’s all I know, myself. I’m sorry I can’t tell you more so that, as you say, you “will understand better,” but it’s impossible for me to explain to you something that I don’t understand either. I’m afraid it will take some higher power than you or I to do the explaining.

No, she didn’t “meet someone else,” that is, at least not before she told me of her decision. It so happened, however, that the pilot who had flown us around the island some months before, Rudy Engle, had been a patient here at the hospital at the time Lois broke up, and she started going out with him a great deal. The whole thing was such a complete reversal that it was incomprehensible. I had thought at first that she just wanted a “fling” but she herself said that she was going to go out with different people. But then she began to “specialize” with Rudy and suddenly thought she was for the “first time in love” with him. Actually, I’m sure she just doesn’t know her own mind one way or the other. I keep hearing from and writing to her, so at least maybe there is some hope. 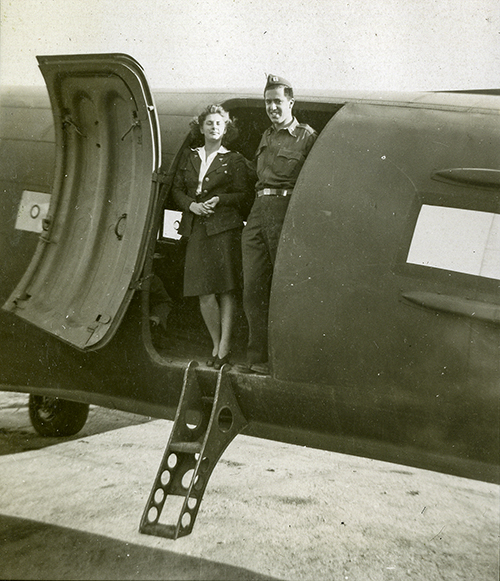 In this letter, René tells his friend Therese, whom he visited in New York in 1943 while he was stationed in New Jersey, that when Lois broke up with him in December, the pilot who had flown them around Sicily in October was a patient in their hospital. And when the pilot was discharged from the hospital, Lois “started going out with him a great deal.”
And to answer a question several Dear Folksies readers have posed: Yes, René and Lois were married (back when they were in Virginia), but they had to tell the Army that they were just “engaged” or they would have been separated into different units. So, because their correspondence was subject to Army censorship, they had to use the word “engagement” instead of “marriage” when they wrote home.