In the last couple of days I received several most welcome letters, and I feel more and more ashamed that I have not been nearly as faithful in writing as you have been.

There are plenty of olfactory impressions to be had around here, and one is constantly tempted to go around with a spare clothes-pin hanging around one’s neck for immediate application to one’s proboscis in times of dire emergency. Fortunately, however, my nose has been blocked on its own frequently enough to prevent some of the extract of skunk from reaching my olfactory nerves.

Yes, I am getting a chance to make use of my childhood French. Though my French ain’t so good, it is passable. I make out O.K. if people don’t try to talk too darn fast to me, and if they open their mouths enough so that all the words don’t run together. I can usually make myself understood by using similar things to describe something that I am talking about but the name for which I do not know. Lois studied some French and can understand pretty well, but she is afraid to talk. She took a few lessons here along with some of the other gals, but quit because it was rather inconvenient once she got working in the ward regularly.

Incidentally, you might tell the Godchaux that though I would like to write to them, or attempt to write to them, in French for the practice, it is impossible now, as it is not permissible to write letters in a foreign language, i.e. without super-special permission.

The food situation here is a funny one. There are several restaurants around town that have good food and their establishments are approved by the U.S. Medical Corps. Some are able to have very good food, such as duck, chicken, beef, etc., whereas others seem able only to get fish, eggs, etc. Apparently it depends on the connections that the proprietors have had in the past – there probably being a black-market in that short of stuff.

Some of the places serve very good wild boar meat. However, for the most part there are only one or two days in the week when the population can get meat. For instance, we visited the home of these French people that Cane had introduced us to, and we were specifically asked to go there on Friday night, as that was the day they could buy meat.

Incidentally, what a meal we had there!! Actually, by the time we got to the meat (chicken), I was so full that I didn’t particularly care whether there was meat or not. We had had several courses consisting of various vegetables, romaine lettuce (for the first time since here), and several fancy pastries and meat patties. All very good, but, despite the fact that I was awfully hungry when we got there, I was not enthused about the last two courses, as there just wasn’t room for them.

As far as flies, fleas, etc., we, so far, haven’t been particularly bothered. There are a number of flies around from time to time, but with some wire-screening and netting that we have over the mess tent’s entrances, we have managed to keep things fairly free of such animules. Of course, we also have a fairly adequate supply of Flit around.

I imagine, however, that as the climate gets hotter we will more and more be bothered by such insects, flies, etc.

Concerning light — at first we had nothing but kerosene lamps. However, as we had a couple of little generators that came along as equipment for our hospital, we soon had lights strung up in some of the most important spots. Then, after George and I got in good with some of the engineers (by giving nurses names to a couple of them, etc.) we were able to get them to lend us a larger generator and the “Lights came on at the 59th.” Finally, our own 3 large generators arrived and we now have quite a power plant, with lights going at present 24 hours a day, coming from a 30KV generator.

I laugh when you ask about ice-cream cones and sodas! With milk so scarce here (though there are numerous cows, they are apparently not well enough to give milk, even if they were sure to be tubercular free), the closest thing we have had to ice-cream has been some sort of water-ice-gelatin mixture that is served at the restaurant associated with one of the hotels downtown. It’s not bad, but it ain’t very good either. We did get some real ice cream twice – once when a ship came in with a whole lot of ice-cream cubes on board, and once when they had some chocolate-coated ice-cream sticks on another ship.

Cooking meat on a spit – one of René’s olfactory impressions? 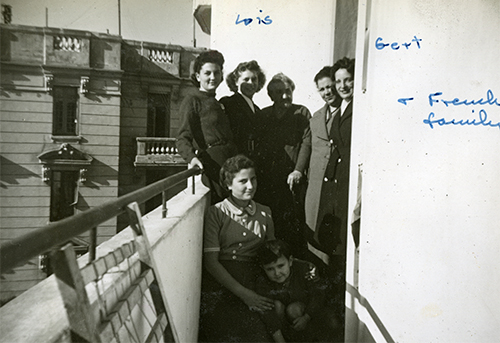 Lunch with a French family in Casablanca gives René an opportunity to use his language skills. 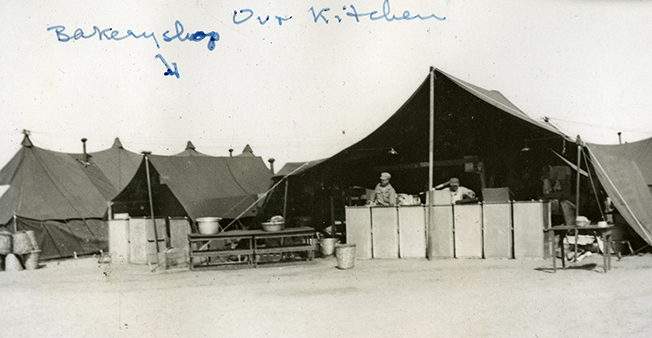 Kitchen and bakery shop for the 59th 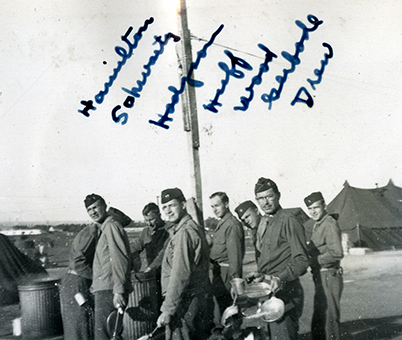 After meals, everyone, including the doctors, have to wash their own mess kits. Shown are Jim Hamilton, Chuck Schwartz, Marv Hodgson, Lou Huff, George Wood, Frank Gerbode and Bill Drew.