On the nite of August 22nd, we got another surprise – two strangers arrived!! None other than Gil Bishop and Chuck Schwartz. Chuck had heard rumors that we were moving around, that big things were in the wind, etc., and decided that it was about time for him to return. Gil had been at the 46th Gen’l Hosp at Besancon and finally got his hands and feet under control (epidermophytosis and epidermophytid) and was discharged. He was supposed to come back thru a Repo depot, but when he got to the depot and found that it was going to be another 5 days before he would leave there and then about 4 days to make the trip by train up here, he got a 48 hr. pass to Paris and there chiseled a plane ride direct to the airport near here – so he was AWOL from the Depot and just now got a letter on his being AWOL.

A few nites ago my friend Maj. Gish (of the Military Gov’t) asked me to supper at his place and for me to bring a few of the gals and another officer or two if I wanted. Chuck happened to be with me when the invite was extended and so Chuck and I went, taking Liz Liss with us and 3 of the 108th gals for the M.G. officers. We had a wonderful supper complete with music furnished by Polish musicians from the D.P. camp in town. Had some little cheese cakes before supper and then a meal of soup, salad (sort of a cole-slaw) roast beef, French fried potatoes, venison, excellent chocolate layer cake, and both vanilla and chocolate ice-cream. I was so stuffed by the time we got to the dessert that I was only able to take two portions of the ice-cream. I was terribly ashamed of my lack of adequate capacity.

We were served by a White Russian woman whose history was rather interesting. She had been in Paris at the time that war broke out and when the Krauts arrived they gave her the choice of going to work in Germany and bringing her 14 year old son and infant girl with her, or remaining in France and being separated from the kids. She chose the former and has been over in Germany since. The little girl isn’t actually hers – she was the daughter of one of her best friends who had been killed. The kid is half French and half Italian. The kid is now 4 (was around till 11 P.M. that nite) and speaks four languages (German, French, Russian and English). She was a cute little blond and it was a kick to get her started talking, for she would so frequently mix the languages up so that you would only be able to get a few words out of a sentence. She was a smart little thing and we kept her talking for a long time.

Watch for the conclusion of this letter
August 27, 1945 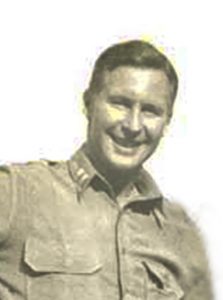 Chuck Schwartz (above) and Gil Bishop showed up on the night of August 22. 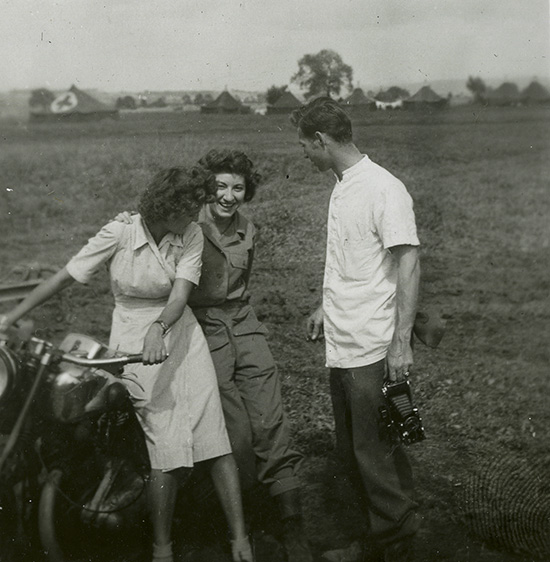 René was invited to dinner by his friend, Major Gish, and extended the invitation to Chuck Schwartz, Liz Liss (above center with Brenda Vencko and Hal Everton), and “3 of the 108th gals.”