Weather yesterday again very nice, but on the crisp side. Today kind of dismal. Outdoors a good bit yesterday and in the afternoon was inveigled into a baseball game. There were only a few of us officers playing so that we did not have an officers vs. enlisted men game, but divided up and had a pretty good game of it.

Golly, I’m stiff today – I can hardly use my right arm to pound the keys of the typer. Thank goodness that one shifts the carriage with the left hand, for it would be quite an effort to raise my right arm up there every time to move the carriage back and forth. You see, night before last I had been throwing a football around for about an hour and a half with the boys in the motor pool and as a consequence I used some muscles that has been inactive for a few months – and they felt it yesterday! And then, on top of that, yesterday afternoon running around the baseball field, swinging a bat, sort of put the finishing touches to my sore arm. So now I guess I will have to crawl back into hibernation again for a few days.

The second baseball game yesterday was funny – yes we were silly enough to not only play one game of 7 innings, but stayed around and played a second one – this running from a little after 1 P.M. to 4:30 P.M. We had some of our star hard-ball players in the game too (this was a soft-ball, of course) and they really got a razzing for, particularly at the start of the game, they pulled some boners, struck out very easily, etc. Yes, even our “Sicily All Stars” Wy and Lefty.

As a matter of fact, because of the last play of the game, Wy will hardly speak to me today. He and I had been razzing each other throughout the game and in the last half of the last inning of the second game, with one man out, two men on bases and the score tied, I connected with the ball for the first time in the game and somehow the ball went out over the first baseman’s head, and as no one was near it, I made a nice three-base hit and got home because the catcher missed the ball when it was thrown to him. What a farce!

Bret Smart has been gone for a couple of days – found out where his brother was and was able to take off to find him.

Played bridge the other night with the Old Man, Bell and Armanini. Had a pretty good game – Old Man and I against Nels and George. Yes, we won for a change.

In our area there is a big tower that once had a clock on it – I guess it is, or rather was, a water tower – and when the sun was shining brightly the other day, Jack and I climbed up there and got what turned out to be some pix of the surrounding country. Hope we get set up soon so I can develop them. 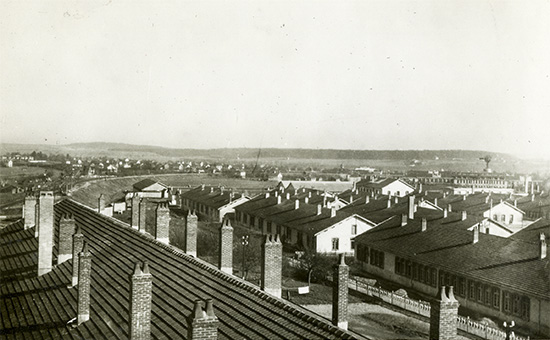 These are the two photographs René took from on top of the big water tower he and Jack Dunlap climbed. 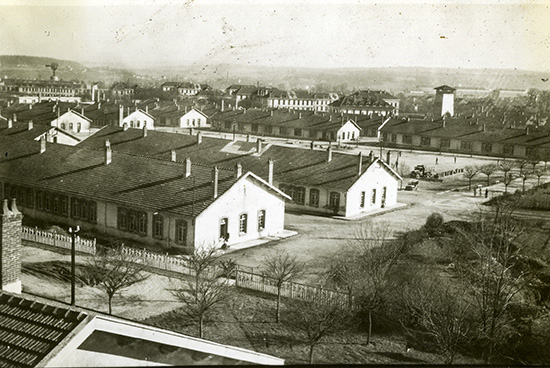