Knowing you as I do I sort of imagine that you have been doing a bit of thinking about the underlying reasons for my admittedly rotten correspondence in the last three and a half weeks. I’ve not only written so little in quantity but I know that the quality has been way below par, and I have been hearing that fertile mind of your going round and round, even way over here. Perhaps you have been on the wrong track, but perhaps you have touched on the right one, at least in a passing fashion, so that what I have to say may not be the shock to you all as it was to me.

I could have written days ago, but somehow I didn’t believe what was going on and felt that it was all imagination, a passing thing, etc., but I guess I was wrong. The blunt fact is that Lois has told me that she doesn’t love me anymore and that it is all off. Or rather, to be more exact, she believes that she was only kidding herself all along and that she didn’t know what love was, and consequently was never actually in love at all. She said that she had thought about it for months and never had had the guts to reach a decision and act, but finally she did, just before Xmas.

I had had no inkling of what was going on in her mind and as a consequence was totally unprepared for what she told me that morning. For that matter, it’s been a great shock to most of the men of the detachment, from all I have heard, for, in an outfit like this, such things really get around in rapid-fire fashion.

When she started going out with others the stories started spreading, just as we knew they would. It’s been awful trying to break the habits I’d gotten into – waiting for her to eat, seeing her every night, etc., etc., too numerous to enumerate. We had sort of become a tradition of some sort to the men (that isn’t quite the word I mean, but I think you know what I mean), and things have now become pretty unbearable for her. As a consequence she is going to attempt to transfer. She hopes to get into the U.C. Unit if possible and as the request for transfer has to come from that end, she is going to wait for that to come after writing to them. Consequently nothing has been said to the Col. or others about her desire to transfer. Liz wants to go with her if it is possible – i.e. to the U.C. unit, partially to be with Lois and also, probably more important, to be with the fellow she is engaged to who at the moment is located near the U.C. gang.

It’s too difficult, and only like turning the knife in me to put down here how I feel, but suffice it to say that I still have hopes that when this bloomin’ mess of a war is over, things will straighten themselves out and she will realize that perhaps she wasn’t just “acting” for the last year and a half. For, though she “didn’t know what love was” I know I have, and my feelings haven’t changed from what they have been for that year and a half.

Being way over here it is awfully hard to say anything to folks back home, and I don’t know how to do it or if to do it at all. Whether ‘tis better to just ignore things written concerning her, or what to do I know not. Please advise! About the only one I feel able to say anything to is Therese – the S.F.’ers I shall leave up to you, unless you tell me otherwise.

I only wish that you had been here during the last weeks – it would have made things much easier and all the problems would have been straightened out in your usual fashion – but you’re not here and we’re not there, soooo.

I don’t envy you the position I’ve placed you in when you go home with this letter, but I’m sorry I can’t do better. 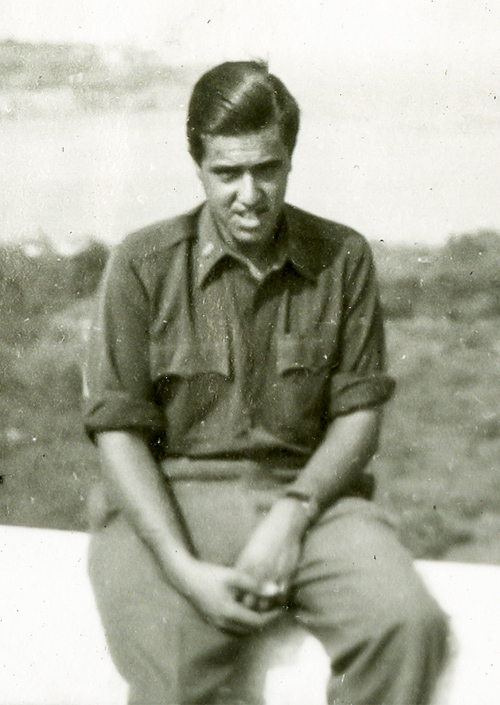